Castration – Why When and How

Home » Breed Info » Equine » Castration - Why When and How 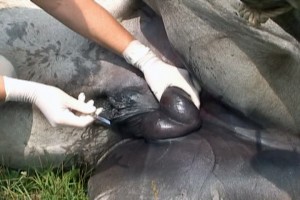 Castration means the complete surgical removal of the testicles.  There are three common reasons that this procedure is performed:  to prevent breeding, to reduce aggressiveness / unruliness, and in the case of undescended testicles (cryptorchidism). Castration surgery is very common and is not considered technically challenging to the veterinarian; nonetheless, it should be left to the trained and licensed professional, because serious and sometimes life-threatening complications are possible if the procedure is not done correctly.  Diligent aftercare by the horse owner is also very important to minimize problems associated with post-op negligence or inappropriate treatment.

The testicles are dual-purpose organs.  Part of the male reproductive system, they produce and incubate spermatozoa; and as an endocrine gland, they secrete numerous hormones including testosterone.  Testicles are located in the scrotum, which is a retractable sac that helps control the temperature of the testicles by moving them closer to, or further away from, the body.  (Sperm develops at a slightly lower temperature than normal body-core temp.)  A cord suspends each testicle within the scrotum, and contains several components:  a blood supply, a duct to carry sperm to the urethra and outside of the body, a gubernaculum muscle, and nerve branches.  During castration, the cords are severed and each testicle is removed.  The scrotum is usually opened yet not removed and will retract on its own over time.  The procedure cannot be reversed (it is not similar to a vasectomy performed on men that is sometimes reversible).

Castrations can be done on any age of horse, precluding any animal with health problems that would prevent the surgery.  Ideally, it should be done at a young age, less than one year preferably, to prevent aggressive behaviors from developing and accidental breeding.  Once a stallion becomes aggressive, castration may not fully resolve his unruliness.  Some owners prefer to wait as long as three years in order to allow the male horse to develop a more muscular and masculine appearance.

Cryptorchidism is a condition in which one or both of the testicles fail to descend from the abdomen, where they develop in the fetus, into the scrotum just before birth.  After birth, the inguinal rings through which the testicles should have moved will close.  The testicles will usually not descend afterward, except in rare cases of “temporary inguinal retention”.  The retained testicle(s) will not be able to produce viable sperm (because of increased temperature within the body), but will continue to produce testosterone.  One retained testicle is referred to as unilateral cryptorchidism (the descended testicle is fully functional).  With both testicles undescended, the condition is called bilateral cryptorchidism (the horse will be sterile).  Retained testicles are usually abnormal in structure as well, and may become problematic later in life, possibly forming a tumor.  Cryptorchid horses are just as likely to become aggressive as would an intact stallion.  The condition is thought to be heritable, or genetically passed from the parent to the colt, although this is open to debate.  Nonetheless, it is not a desirable trait, and unilaterally cryptorchid males should not be allowed to breed, despite being able to do so.  The surgical procedure for cryptorchid animals is more invasive and is not described here.

Normal castrations are performed in several ways according to the preference of the veterinarian.  A standing castration involves sedation and local anesthesia of each testicle.  The surgical site is disinfected, and an incision is made through the scrotum over each testicle.  The testicle is exteriorized, the cords crushed with an emasculator or ligated with sutures, then cut free from the body.  The veterinarian will examine the remaining portion of the cords for bleeding and intervene with additional ligatures if there is persistent hemorrhaging.  The incisions in the scrotum are left “open” to heal by second intention (without suturing).  Problems that can occur during the standing castration include injury to the animal, the veterinarian, and assistants should the horse object, kick, and struggle.  Many veterinarians choose not perform standing castrations for these reasons.  If an emergency such as excess bleeding occurs, the horse will have to be immediately anesthetized and the problem corrected.

Recumbent castrations require the horse to receive a general anesthetic, and may be performed in the field or at the veterinary hospital.  The latter is preferred because of the cleaner controlled environment and improved sterility.  Still, most are done in the field.  After the horse is fully anesthetized and laid on its side, the same surgical procedure described above will be performed.  In the hospital however, there is the option to close the incisions, in hopes of preventing some of the potential complications that may arise after surgery.

Many owners worry about their horse surviving a general anesthetic.  Actually, anesthetic accidents are very rare.  Albeit more expensive, recumbent castrations are overall safer for the animal (not to mention the doctor) in minimizing risk and avoiding complications.

After surgery, the owner should follow the veterinarian’s aftercare instructions.  These will include keeping the incision clean and watching for excessive swelling or any protrusions from the openings.  The first 12-24 hours after castration, the horse should be confined to his stall to fully recover from the anesthetic drugs.  Afterward however, the horse will require forced exercise if the incisions are left open.  This will encourage the drainage of accumulating serum from the incisions.  If the horse is kept overly confined, the retained serum may form a seroma (fluid filled mass) and may lead to pain, infection, self-trauma, and delayed healing.  On either surgical technique, there is a slight risk of inguinal eventration (hernia).  Eventration is a life threatening emergency where a loop of intestine becomes strangulated through the inguinal ring and incision.

Some swelling is expected after surgery, but if it becomes severe, or the incisions appear angry and inflamed, there is pus (milky discharge) or protrusions of tissue from the wounds, or the horse seems especially uncomfortable, the veterinarian should be consulted immediately.

One important consideration before castration that has not been mentioned thus far is the possibility of tetanus infections post-surgically.  Tetanus is a severely debilitating to life-threatening disease caused by Clostridium tetani bacterial infections.  All horses being scheduled for castration should be current within the last six months on tetanus vaccination.