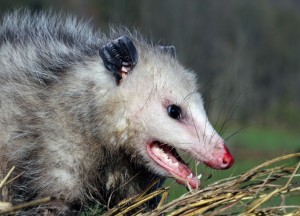 Opossums of North and South America carry and shed a parasite called Sarcocystis neurona that is capable of infecting equines and causing a devastating neurological disease named Equine Protozoal Myeloencephalitis, or EPM for short.  The parasite spreads by fecal to oral transmission when the horse inadvertently consumes feed or water contaminated by opossum excrement.  Many horses (greater than half) in opossum-infested areas will at some point be exposed to sarcocystis, but only about two percent of those animals will develop advanced neurological symptoms as they are for some reason unable to fight the infection.  About four out of ten symptomatic horses will die from the disease eventually despite treatment.  If detected and treated very early however, before the disease has progressed, around eighty percent of infected horses may survive.

After ingestion by the horse, the parasite crosses the blood-brain barrier and takes up residence within the cells of the central nervous system (CNS) where it is able to reproduce.  The offspring abandon the now damaged cells and seek healthy ones to infect, leaving lesions of scar tissue and inflammation (swelling) behind in their wake.  Most horses are able to control the sarcocystis populations with an antibody response from the immune system.  Once harbored within the CNS cells however, the horse’s immune system is unable to detect and kill the parasite.  It is speculated that stress to the animal may at some point allow the parasites to reproduce at uncontrolled rates, causing neurological disease as a result of numerous and advanced lesions within the CNS.  Immune stress can stem from exercise, transport, diet change, subsequent illness, anesthesia and surgery, certain medications, or even inclement weather.

It is not known why ninety-eight percent of exposed horses are able to eradicate the parasite without treatment or evidence of disease, leaving the other two percent defenseless.  There is no remarkable breed, age, or sex predilection to explain the susceptibility to sarcocystis.

Neurological symptoms of EPM are often vague at first and almost always asymmetric – meaning that one side of the animal may be affected while the other is normal.  They are a direct result of nerve inflammation due to cellular damage.  Un-attributed lameness and mild ataxia (incoordination) are the most common first observed symptoms, followed by a head-tilt and muscle atrophy (wasting) especially in the hind-quarters due to inactivity or reluctance to exercise.  More subtle neurological symptoms include one-sided facial paralysis (drooping of the lips and eyes), nystagmus (rapid eye movement), regurgitation (expelling of food and water from the mouth), and behavioral changes.  Advanced disease may result in seizures, inability to stand, and death.

Equine Protozoal Myeloencephalitis is difficult to diagnose.  Its symptoms may be confused with numerous other disease processes and may affect any part of the animal.  Ruling out all other causative factors is the first step in diagnosing EPM (i.e.: most horses with EPM will not have an elevated temperature).  Age, history of symptoms, stressful events, geographic location, and the season of the year will all be considered in a diagnostic workup.

The veterinarian will perform a neuro-exam on suspected animals, whereby the horse will be observed for any neurological deficits.  The Mayhew Scale is a standardized method to record and grade any abnormalities arising from neuromuscular disruptions.  The horse is lead through a series of maneuvers designed for this purpose.

Blood tests and cerebrospinal fluid (CSF) taps measure the horse’s immune (antibody) response to the parasite.  A positive result can only prove that the horse has been exposed to sarcocystis but doesn’t confirm an active infection.  Remember that as many as half of all horses have been exposed to S. neurona.  These tests are still useful as a rule-out test nonetheless (there are very few false negative results), and are performed during the diagnostic workup on the symptomatic horse.  The only definitive laboratory test available at this time is the positive identification of the parasite microscopically in the CNS tissue after the horse is deceased – not very useful during the attempt to save the animal, however.

A presumptive diagnosis of EPM can be made when a response is seen to antibiotic therapy.  Sixty percent of horses will respond positively to treatment within a month.  The percentage is higher, the sooner the antibiotics are begun.  If no response is seen within 14 days however, other disease processes should be considered.  If the horse is improving, therapy will be continued for at least 12 weeks, or until a negative CSF test is seen.  Other drugs used in conjunction with antibiotics are helpful to reduce swelling in the CNS tissues, enhance immune response, and to reduce the severity of symptoms.  These include non-steroidal anti-inflammatory drugs (NSAIDS), folic acid, thiamine, and vitamin E.  Steroids, which effectively reduce swelling but also suppress the immune system, are generally avoided.  After remission, about a third of horses will experience a relapse.  This is usually because the treatment was stopped too early (expense becomes a factor).  Horses that have survived EPM should be considered susceptible for re-infection at any point.

EPM occurs so sporadically that it is difficult to prevent.  There is no approved vaccine, so the best measures are to control opossum populations in close proximity to the barns and stables.  Keep in mind that horses can become infected in the pasture as well, but obviously avoiding contact by opossums with prepared feeds, water troughs, and stable bedding would be beneficial.  General sanitary procedures where horses are kept are essential to prevent all sorts of disease.

In order to improve the prognosis for a horse with EPM, it is vital to consult a veterinarian at the earliest signs of any neurological symptoms.